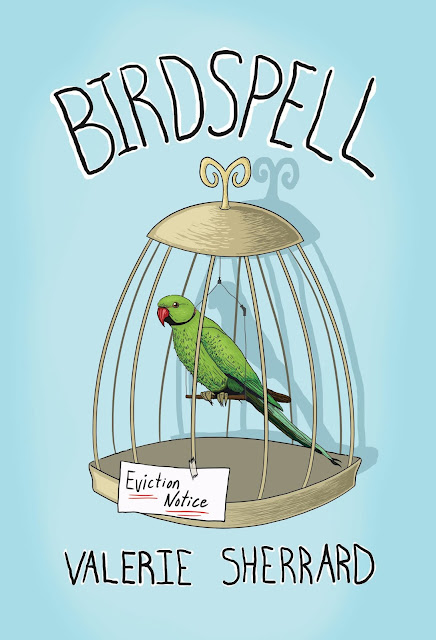 Corbin Hayes has felt alone for as long as he can remember. His mom’s illness means lost jobs, constant moves, new schools and friendships that never get to grow. There’s a gap in his life that’s been waiting to be filled.

So, when a classmate offers Corbin the talking bird she can no longer keep, he’s stoked.

But when things begin to spiral out of control, Corbin can no longer get his mom – or himself – through the dark period. At his lowest moment, he’s forced to do the one thing he fears the most.

Reviews of this story:

From Quill and Quire:  "Birdspell offers remarkable insight to young readers unfamiliar with mental-health issues. At the same time, it provides rare validation for those children who struggle with it in their daily lives. Despite the gravity of the subject matter, Birdspell is a very readable book laced with humour and grace." Full review here: Quill and Quire

From CM Magazine: "Birdspell is a deep and beautifully written title that once begun is hard to put down. Despite the tragedy of the circumstances, the novel is a compelling story of strength, hope and compassion." Full review here: CM Magazine

Posted by Valerie Sherrard at 6:08 AM No comments: 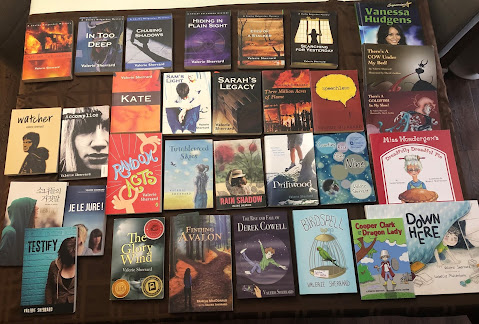 A friend once remarked that it's difficult to keep track of my books. I can hardly argue with that when I regularly have to double-check details myself. This explains the confused look you'll see on my face if you ever happen to ask me how many books I've written. Which, of course, is not the same as how many have been published (also an incomplete figure as it doesn't take into account those that are under contract but not yet released). And the tally never includes the wretched efforts that have been abandoned (not deleted, mind you) at some stage of writing, or, if completed, stories which good sense has kept me from sending out.

I am aware, of course, that a general figure is more than enough to satisfy the innocent curiosity of anyone who happens to venture that dreadful question. Sadly for them, that rarely prevents me from offering (much) more information than their polite interest warrants.

All the same, it seems the responsible thing to do -- to have a list of publications readily available. So here it is!

Posted by Valerie Sherrard at 10:12 AM 5 comments:

The Rise and Fall of Derek Cowell

Shortlisted for the 2021 Red Maple Award!

Hi, my name is Derek Cowell.

You might remember me from when I was popular.
Before that, I was invisible. And after.. well, that's a long story.

I never expected to become popular. It just sort of happened.
An accidental photobomb, a chance encounter with a real live celebrity, and suddenly, I was somebody.

These things never last, though, unless you help them along.
That's where I ran into trouble. 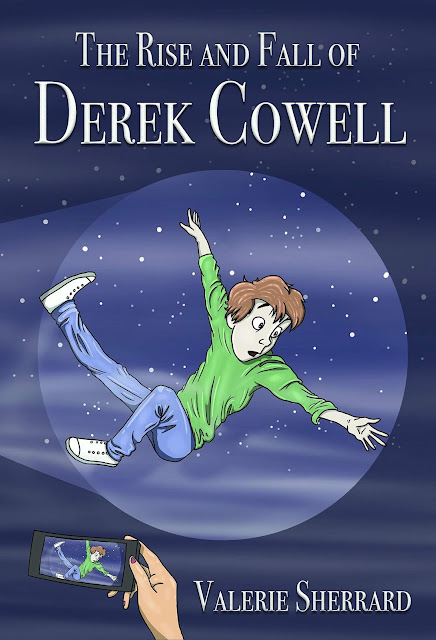 This is my daughter Pamela's first novel. I was so happy to be part of it, contributing a minor character voice. You can't even imagine how proud I am of my girl! Here is the stunning cover of this forthcoming story for teens! 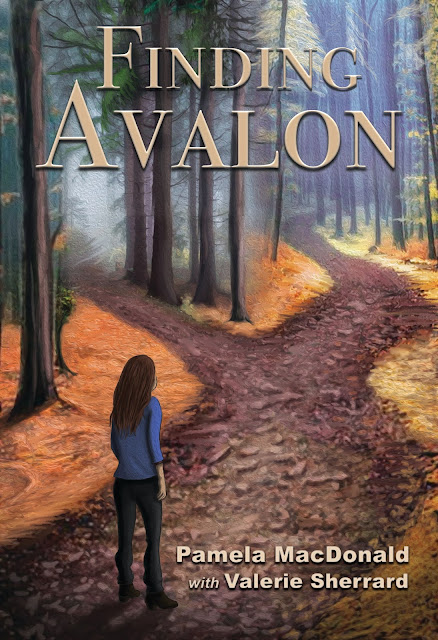 A bit about the story:

Avalon Monday doesn’t mind telling schoolmates that her mother ran off to California to live with a guy she met on the internet. After all, that’s way less embarrassing than the truth.

But one fresh start and three years later Avalon discovers there are things you can never truly leave behind. When her past collides with her present, will it expose her secret and leave her new life in ruins?

Finding Avalon has been reviewed in:

Posted by Valerie Sherrard at 3:24 PM No comments:

I LOVE this guy!!

By this post's heading, you're probably expecting a long, mushy message about my husband (whom I DO love) but I'm afraid another fellow has also captured my heart. His name is Cooper Clark, and I have to admit, I'm quite smitten with him.

Cooper is full of opinions and ideas! In his first adventure (book # 2 is in the works) he comes up with one zany plan after another in order to avoid facing his fear of dragons. Some of his plans will be recognized by young readers as things they themselves have tried. Others are unique. Here's what happens: 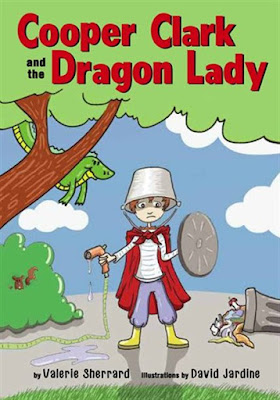 Cooper Clark's world takes an alarming turn when his regular babysitter gets a new job.

Arrangements are then made for Cooper to spend his after-school hours with old Mrs. Mulligan — a plan he does not care for one bit! Everyone knows that Mrs. Mulligan has a real live dragon in her basement and although he has kept his fears secret, Cooper is very afraid of dragons.

Not willing to expose his secret, Cooper does his best to find a way to avoid Mrs. Mulligan's dreadful pet .

It isn't until he runs out of ideas that Cooper makes a most important discovery.

This is my first chapter book. I hope you love it as much as these reviewers did -- or even more!

Review of this story from Atlantic Books Today

Review of this story from CM Magazine

Review of this story from CanLit for Little Canadians

Posted by Valerie Sherrard at 5:41 AM No comments: 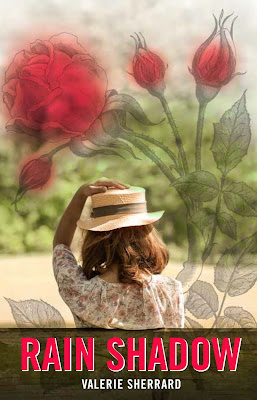 Bethany knows that she is special.

She doesn't learn things as easily as her classmates do and that sometimes makes them mean to her. They call her names -- including the really "bad" name. Even her mom and her sister Mira say unkind things at times. But Bethany has friends like her neighbour Mrs. Goldsborough as well as happy times with Daddy when he gets home from work. And now, Mira has promised to protect her from the bullies when the new school year begins.

Then tragedy strikes, tearing Bethany's world apart in way she could never have imagined, and she starts to wonder if there will ever be a place that feels like home again.
* * * * *
I have chosen to return to the fictitious setting of Junction, Manitoba (setting for The Glory Wind) in this story.
* * * * *
Please support independent bookstores, whenever possible.


Shortlisted for the Canadian Library Association 2015 Book of the Year for Children.

Shortlisted for the 2016 Diamond Willow Award.

Rain Shadow has been reviewed by:

Posted by Valerie Sherrard at 6:58 AM 5 comments: 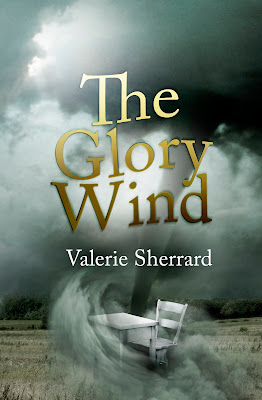 The news was just on in the background that evening - I was in the other room, and only caught a snatch of a story that probably lasted less than half a minute.  It made no particular impression, but the next day it had created the beginning of an idea that would bloom into The Glory Wind.  And this is often how it is.

Luke Haliwell must come to terms with the prejudices of his 1940's prairie town when Gracie Moor and her mother move in next door.  Gracie is unlike anyone Luke has ever known, but when the town discovers that Gracie's mother is hiding a shameful secret, Luke learns that friendship can come at a great cost.

Published by Fitzhenry & Whiteside, this story is in bookstores now.

I loved writing The Glory Wind.  I hope you will love it too.

News Updates for The Glory Wind

Winner of the Bronze Medal in the
2011 Independent Publisher Book Awards, Canadian Regional


A few reviews of The Glory Wind:

Curled Up With a Good Kid's Book 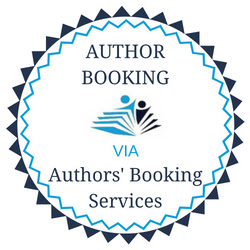